Having been too young to fully appreciate the Alien movies first time around I was able to watch Prometheus without making constant caparisons to the first four films. So when the plot diverted slightly from the first film I didn’t feel cheated or that sacred ground was being trampled on. Although Prometheus has not been billed as a prequel to Alien many have been viewing it as such.

It is 2093 and a group of unconventional scientists and archeologists are sent to investigate the origins of humankind on a distant planet in their ship Prometheus, by Peter Weyland (Guy Pearce), the aged CEO of Weyland Corporations. When they get there they find a large construction made by what they think may be extra terrestrial. As they explore the structure they come across snake-like beings and begin to realise that the true purpose of their visit has not been fully disclosed to them.

The film is both Sci-Fi and Horror, with the characters making dubious decisions which isolate them and put them in vulnerable situations. There is also comedy to break the tension and Idris Elba’s one liners are brilliant as he taunts an uptight Meredith Vickers, played by Charlize Theron. There is some excellent acting in the film with Noomi Repace playing the invincible powerhouse Elizabeth Shaw with passion and grit. Michael Fassbender is also superb as the complicated android David.

As is expected the visuals are excellent and with CGI effects and imaginative set design the world on board Prometheus and in space are mesmerising. A lot happens during the film but the action is fast paced enough so that the 124 minute running time is barely noticeable.

As Hollywood blockbusters go this is probably one of the year’s best, having already made $147.7 million at the box office I think that this film will go on to smash records and draw a whole new generation of fans to the other Alien films. Prometheus is a definite hit which should not be missed!

My last memory of the MiB is linked with Will Smith’s accompanying 1997 single and dad-dancing, so I was glad that this new instalment would provide for a less embarrassing picture to add to my memories of the franchise. Now I can replay the amusing moment when a usually super-chilled  Smith looses his cool and smacks a Russian reporter around the face for trying to snog him on the red carpet!

MiB III is all it promises to be, its funny, it has great special effects and an entertaining story. In this instalment Agent J travels back in time to the colourful 1960s to save his partner, Agent K, from being murdered by alien villain Boris the Animal at the NASA Moon Launch.

I was lucky enough to take my Year 7 Filmmaking Club to a special preview of Red Tails in June with leading man Cuba Gooding Junior. Cuba was on form as usual during the Q&A that followed the film and it is a pity that we do not get more dialogue from him in the actual film, instead we get lots of shots of him as Major Emanuelle Stance staring over an airfield smoking a pipe which is a great shame considering his acting potential. The more important role of Colonel Bullard is played by Terrence Howard, who lacks the charisma and worn wisdom that Cuba would have brought to the character, a poor casting judgement. 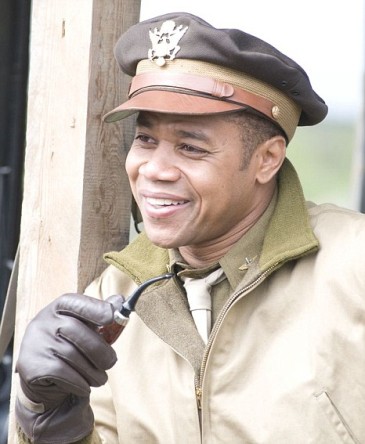 With support from George Lucas and a $58 million budget the production values in this film are excellent and the audience is utterly convinced that we are watching scenes unfold in 1940s Italy whilst watching the Tuskegee Airmen (the first African American squadron of fighter pilots) navigate through the high-definition skies as they escort the first American bombers attack over Berlin. The film covers the institutional racism endured by the pilots by the American military who saw them as a social and intellectual inferiors; but it also explores that camaraderie that was present amongst the men.

Both Neyo and British actor David Oyelowo are excellent as ‘Smokey’ and Lighting’ bringing comedy to this action film.

I enjoyed the film, not simply because it celebrated the influence and contribution of black people towards the Allied victory in WWII, but because of the charming characters depicted. I also feel that the film could benefit from tighter editing, at over 2 hours long my film kids were beginning to waver toward the end!