Paradise: Love is a quirky black comedy set in modern-day Kenya. It is part of Seidl’s Paradise trilogy which features films Paradise: Faith and Paradise: Hope.

It is the final instalment and follows 50-year-old Teresa, a lonely over weight and stressed out Austrian, who goes to Kenya to meet up with a friend. Locally her friend is known as a “sugar mama” which basically means a kind of sex tourist, picking up young black Kenyan men for sex in exchange for money and expensive gifts, she boasts about buying her lover a motorbike as an investment toward her sex life and later buys a dancer to perform at Teresa’s birthday gathering with the intention of having sex with him.

At first Teresa is subdued, shy and giggly. Although intrigued by the Kenyan men she is uncertain about picking them up and literally runs away from her first sexual encounter.

At times the film is awkward as Teresa and friends talk about all the Kenyan hotel workers looking the same. The women objectify the Kenyan men referring to them as wild and exotic. During the story Teresa becomes less and less innocent as do the men she picks up.

Paradise: Love is a brave film which is both harsh and tender with an excellent performance by Margarethe Tiesel. 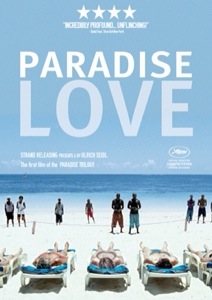